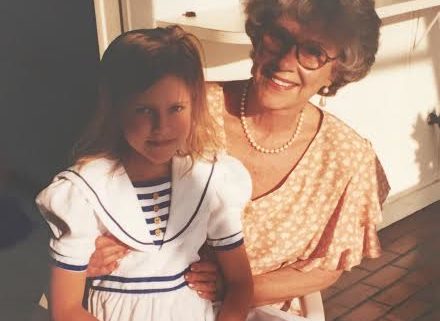 I can’t believe it’s been 17 years since you passed away. It was peculiar, yet romantic how closely you followed Papa Zadee. I like to think that you two are zipping around Heaven in your larger than life Cadillac (that my friends loved calling the canoes for Jews) and spending your evenings raising money for Heaven’s community center. (Tax deductible, of course.) You two were always so generous with your time and money. I hope to be able to give back like you did one day. I always admired your work ethic. The fact that Papa Zadee grew up on the wrong side of the tracks with the stigma of being one of the only Jews in town (before Steven Spielberg made it cool) and still managed to become one of the most respected businessmen in the entire state gives me so much motivation. Don’t you worry – I know he couldn’t have opened two jewellery stores without your epic sales skills and support. #Powercouple. (Oh yeah, GG – hashtags are a thing now. I will explain more about that and Snapchat in my next letter.)

Gosh, I really miss you both, but especially you right now, GG. I hate that you’re not here to see the woman I’ve become. And I’m not just talking about the fact that I’m now a B Cup. (Thank you, breastfeeding!) I’ve built a life for myself and it kills me that you don’t get to watch me be a contributing member of society.  I’m an author of actual books sold in actual book stores. But mostly, I hate that you missed my Bat Mitzvah. On a scale of Personalize Your Own Ice Cream Bar to Guest Performance by Usher, it was a solid 7. The theme was Betty Boop and nothing showed my transition into Jewish Adult Life like that Cartoon Cigarette Girl. You would have been so proud.

Since I know you’re busy up there planning dinner parties and making everyone envious of your ability to wear an iridescent purple track suit in a way that only you and Kate Middleton could make elegant, I’ll get to the point. I have two confessions.

This may be obvious based on his name, but Paul’s not Jewish. Go ahead, roll over. I’ll wait. I bet that’s more comfortable anyway isn’t it?

Paul is a wonderful soul and he adores me. He truly loves that I’m Jewish. I’m not sure if it’s my faith, my mom’s Noodle Kugle or the fact that he gets to dance the Hora at the weddings we go to, but he’s completely on board with raising our kids as members of the tribe. He has enjoyed having Shabbat dinner with our friends and thinks my free birthright trip to Israeli in 2007 was right up there with schoolies. I know what you’re going to say, “What about that nice boy, Jacob? He was Jewish and in Finance.” In my defence – Jacob was kind, yes, BUT Paul’s Australian. That accent is like catnip to us American girls. He called me, “Summah” and offered me Pavlova. What was I to do? You know I’m an eater. I promise that you’d love him. You’d also adore your great grandbabies, Daisy and Axel. Daisy is two and full of light. We had her Hebrew Naming at B’Nai Israel in Florida last year. We chose, Carmiya, which means vineyard of the Lord. We’re currently living in a rural mining town in Australia, which also conveniently happens to be wine country. Now that I think about it, I may or may not have been slightly buzzed when we chose her Hebrew Name. As for Axel. (Who Daisy calls, “Asshole” in her cute two-year-old voice.) I’m not sure if he can have a Hebrew name because we didn’t have him circumcised. Paul’s not and he felt so strongly about keeping that extra inch of skin on our son. Since both of our babies have my last name, I felt like I needed to let him win this one. And to be completely honest, I didn’t want him to be snipped either. Once you get slack, you never go back, right? That little extra epidermis Swag looks like such a safe place for a penis. But does this mean that Axel is less Jewish? There’s no one in Mudgee for me to ask. I guess I’ll have to check with Rabbi Google. As far as I know, we’re the only Jewish people in Mudgee. Even after five years, I have yet to find another person who shares my affinity for Gefilte fish and I consider myself to be quite the social butterfly. I really miss having a Jewish community especially as a new mom with a baby foreskin problem. I also miss being able to eat Chinese food and see a movie on Christmas Day. Mudgee is great, but I need a Jewish community. I especially need my wise and sassy Jewish grandmother.

How will I be able to show my kids the joy of seeking out the Affi Koman at the Auerbach’s house? What about skipping school for the High Holy Days? They need to experience the Roseman’s Matzah Ball Soup. Mine is sub par. What about Hebrew School? I LOVED going to Hebrew School and flirting with Arthur Goldstein. I mean learning about the Maccabees and stuff.  No child should have to go through life without experiencing the amazing head rush you get after trying to blow a shofar. Oh GG, I know that if you were here, you’d fly to Mudgee and raise money to open up a synagogue and also raise awareness for Jews with Foreskin. #JWF. We could even make bracelets. Just last week I had to explain to my curious/ judgemental masseuse that being Jewish is different than being a Jehovah’s Witness and that yes, Daisy can still participate in the town’s annual Easter egg hunt. She was so relieved when I told her that my kids could celebrate their birthdays because, “Birthday parties are a big deal here.” Little does she know that I treat birthdays like Kanye treats his ego. They should be publicly celebrated all year round.

Anyway, I hope you’re not too mad about the whole non-Jewish husband and Axel thing. I promise our family is anchored by love, respect and faith and after all, isn’t that what religion should be about?

Should You Do The High Ropes Course At Taronga Zoo If You’re Breastfe...