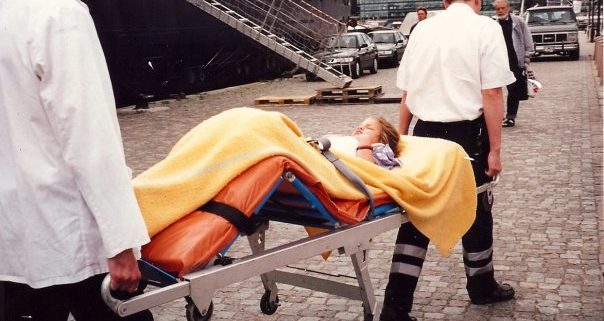 When I was 10, my grandmother, Gladys AKA GG, announced that she would be taking my brother, Brett, and me on a cruise of the Baltic to see Norway, Denmark, Sweden, Finland, Russia and Estonia.

Beyond excited, I had my mum, Donna, take me to Limited Too to buy some cute (but modest) sundresses for my trip abroad. After talking her into also buying me my body weight in lime green body glitter, a new swimsuit (with matching scrunchie) and some maxi pads (just in case I got my period in Europe…) I felt ready to go.

The days leading up to our departure, I made my way through half of my pack of pads. I was DYING to get my period. I had read Are You There God, It’s Me Margaret like a thousand times and just NEEDED to start menstruating. I was trying out the pads because I wanted to feel confident that they didn’t show through any of my new outfits. (Not just because I felt super cool wearing them, I swear.)

With my brand new blue luggage weighing just under 50lbs, GG, Brett and I set off for our Scandinavian adventure.  I was a little nervous about going on a ship. Titanic had just hit theaters and the thought of Jack disappearing into the abyss was still fresh in my mind. What if I found my Jack on our boat? I was so young, it would be such a shame to lose my lover before my eleventh birthday. I pushed the negative thoughts out of my mind and tried to stay positive which was rather easy because the kids on this cruise were awesome. I immediately became besties with a girl from upstate New York named Laura on our first day in Denmark. Together we went to Tivoli Gardens, rowed a Viking ship and searched for that tiny mermaid statue. We spent the next week exploring the fjords in Norway and trying on her big sister’s thongs. We also searched fruitlessly for first signs of pubic hair and felt our budding breast buds. We of course also waited impatiently for the impending arrival of our periods.

The thing that was so amazing about this cruise was the rooming situation. The adults had their own rooms and the kids all shared. This gave us a lot of freedom and independence. While the oldies drank and socialised, us youngens did our best not to cause too much terror. But after consuming roughly 12 cans of Coca-Cola in less than an hour, our sugar fueled bodies were out of control. First Laura and I went into one of the boys’ room and found a bunch of tighty-whities and threw them all over the lower deck. Next we got two more girls involved and choreographed an entire dance to “You Don’t Own Me” for the boat’s talent show that night. Not going to lie- we nailed it and looked incredible since I had enough Limited Too sundresses to go around.

As parents and grandparents sipped their cocktails, we retreated to my cabin to play. Still high off of our talent show performance (and IV of Coca-Colas thanks to Laura’s dad’s tab) we had the brilliant idea to put a bunk-bed ladder across the top bunks of two beds to make an obstacle course. My alter-ego, Christina Lachee, (she’s a tiny Romanian gymnast) was fully in her element.  I hopped across the hot lava with cat like agility, my forward roll on the bottom bunk mattress was on par with the fat kid’s from Hook. Getting from the bottom bunk to the top without using my left hand was challenging, but I did it. When I got to the ladder bridge I paused. The ladder barely reached each bed, which meant that there was no wiggle room. I had to keep the ladder in place or I would plunge into the “lava” below. I placed my hands on the ladder and began to crawl.

My body was in the lava! The ladder was crushing me. I screamed out in pain. Laura ran to find an adult to help me. As I laid on the floor helpless, news of my accident began to spread. Mieke, a beautiful little girl from India had heard that I was paralyzed. When she found my brother in one of the hallways, she broke the news about my tragic accident. Brett thought this was a joke so he laughed in her face. Horrified by his insensitivity, she dramatically slapped him across the face.

As a little sister who had reaped years of wet-willies, I appreciated this.

Within minutes GG came rushing in the room clad in her shiny purple track suit with an incredible amount of gold and diamond jewelery from her ears and fingers. I was so relieved to see her. Her signature smell was so comforting. (Little did I know that this smell was vodka… I didn’t figure that out until high school when I had my first sip of Grey Goose and thought, whoa this smells like GG.)

GG and the cruise staff made me stay on the floor incase I had a spinal injury. We were docking in Stockholm the next day where I would be taken to the hospital for x-rays. GG stayed by my side all night. As much as I was loving all of the attention, I was hating the floor. I knew that I was fine and that my hospital trip was just a precaution. I wanted to get up and play with my friends. But more than that, I wanted my period. Oh how I wished that everyone was comforting me because I was finally shedding the lining of my uterus.

The next morning, I was loaded onto a stretcher and rushed to Stockholm’s hospital. This was amazing. Onlookers gathered around as they carefully stabilized my neck and strapped me down. The ambulance made it’s way down cobblestone roads to the hospital. I felt like I was in a movie! After a full body x-ray it was determined that I was 100% fine. Actually I was better than fine since I am obsessed with hospitals and people feeling bad for me. Even though I didn’t get my period for three more years, getting to ride in an ambulance in Europe was a phenomenal consolation prize.

I wanted a burrito. All I got was tears.

Tasmania is amazing.
Scroll to top