When my friend Jess told me that we were going on a boat for her Hen’s Night I immediately started picturing myself lounging on a yacht with wine and cheese. When she told me there’d be topless waiters, I got even more excited at the thought of Channing Tatum pouring me a glass of Moet.

When the evening rolled around, I carefully chose an adorable romper because I didn’t want a dress blowing up in the wind. I paired it with a fabulous high pony and necklace and walked through Sydney’s Darling Harbour and over to the Star Casino where the boat would be waiting. As I crossed a nearby park, I noticed another bride to be and her maidens lying on the ground with empty bottles scattered around them.

“Hmmm that’s weird. Maybe they’re planning a boat adventure too.” I thought to myself.

All of the sudden, I heard the ground start to shake. It sounded like a train was coming. (A high pitched squeaky train that is.)

Another bachelorette party covered head to know in pale pink plastic penises quickly rushed past on both sides of me. As I gathered myself and checked to make sure that I still had my clutch, I looked up and saw our boat. It was definitely not a yacht. And this definitely not a private event. The wharf was covered in white veils, sashes and hair extensions.

Jess and her other friends arrived and we made our way onto what I learned was called “Wild Boys Afloat.” We were escorted to a table and served a red concoction that looked like it had passed through Elmo. Since I didn’t know any of Jess’s friends I tried to talk, but had a giant speaker in my ear. The MC was going on about all of us “horny bitches” and how we were about to get the show of our lives. I have to hand it to whoever made this cruise up. Not only did they supply booze and naked dudes, they also supplied food. As I made my way down the buffet line, I wisely chose items that I knew would be okay to throw up. (So proud of the frat boy inside of me.)

After I ate my third bread roll, the show began.

I want you to picture a Greek statue coming to life. But that Greek statue is dressed as a fireman. (If the cliché isn’t broke – don’t fix it, right?) I’m not kidding, what I saw next blew my mind. Have you seen that movie Hot Tub Time Machine? You know – the one where John Cusack and his mates go back to the 80s? Well this was like a Stripper Boat Time Machine. As this super sexy fireman kick balled changed his pants off, I was transported back to 1987. By the time he hitch-kicked and pivoted to dive into one of the bride’s crotches, my chin was literally on the floor. I couldn’t look away. The fireman’s nipple ring sparkled in the strobe light, his jazz shoes and knee pads showed that he took his job seriously and then holy F I saw his penis.

Did you know that they get fully nude???? I just thought that I would see a razor-burned pimply butt. But no! I saw shaft. (No, he didn’t use it as a hose to put out the fire… that would have triggered an apocalypse.) Instead he used a water bottle to douse himself. It was like a magical naked man thunderstorm.

When the fireman exited the stage, I started wondering about the inventor of the chair. Did he/ she know that when they were designing a four legged sitting apparatus that male strippers would be mounting someone’s betrothed while dancing to the theme song from the Matrix? But before I could finish that thought – Mr. Officer came out. And boy did he know exactly what to do with that nightstick. Seriously – the prop use was amazing. When he finished using his shirt to sexily “sneer” at us, he tossed it off to (what I’m going to call) a ball boy. These little strippers in training must have practiced at the Australian Open because they could collect a rogue g-string quicker than you can say “Mine!”

Even though I had expected Moet, the weird bottom shelf vodka-cordial mix was perfect. So were the classically trained male strippers. I loved their pointed toes as they grinded on our faces. I loved that everything was choreographed perfectly. I loved that the boat was full of women. I’ve never felt so comfortable leaving my purse on a chair. It was like we were all just good friends looking to see some ridiculously toned abs. (Of course I got to stroke a six-pack.) The 15-year-old inside of me woooo’d the night away.

But the best part about the night was that I got to check an important NEED off of my bucket list – I saw a male stripper dance to Nickelback.

Just let me do it. 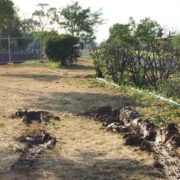 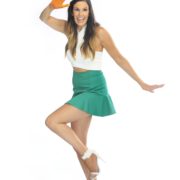 The time the ground ate my mom.