One of my favourite things to do in the entire world is pop my husband’s zits. It’s not just his actually. I enjoy squeezing anybody’s face, back, head, leg, arm, bikini line or butt if it means a blackhead is going to ever so satisfyingly slide out, or a wad of puss is going to hit me in the face.

Unfortunately, my husband HATES it when I try to go to town on his nose. You would think he was being murdered. I swear, tears actually well in his eyes and he screams out in agony as I (gently) press my fingers down in an effort to get a thousand little white wormy puss things to surface. Of course, he rips his face away from me before I can do the other side. SUCH a baby!

To his credit, he’s actually pretty good about his head zits. Maybe his scalp is just tougher. Once, he even let me squeeze a tiny black dot on his neck. Without hardly any pressure, a half-inch grain of rice appeared. We both looked at it in amazement. We were sure it had been in there at least since TATU and N*SYNC were at their peak. I tried to save it, but we were driving and I dropped it when we went over a bump. (Don’t tell, but I still sometimes look for it in between the car seats.)

How can something that brings me so much joy cause my husband so much pain? It’s just not fair. And that’s why I think I should be allowed to pop my husband’s zits any time I please.

1. I gave birth to his child. (Yes, there were stitches.)

2. I moved to a new country for him. (There were plenty of zit covered men in America mind you!)

3. I am extremely flexible and am always willing to go the extra mile in the bedroom. (Okay not always, but when I do it’s amazing.)

4. Not only did I move to a new country for him, I moved to a town of 12,000 with no movie theater so that he could work in a coal mine. (How am I supposed to entertain myself with no movies???? ZITS! THAT’S HOW!)

5. I’m just looking out for him. I mean, how bad is it to pop a pimple? I’ve been squeezing my face for years and I swear I have a pretty decent complexion. 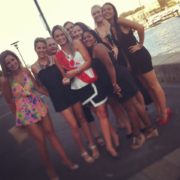 I auditioned for a KFC commercial. It did not go well.

10 Summerlandish Selfies to inspire you to travel!
0 replies

GUEST POST- Nicola Wood! My one regret.
Scroll to top