A few days ago I decided to embark on a meal plan similar to a rabbit’s. No, I’m not doing a new years cleanse, I’m not an aspiring lifestyle blogger or trying to lose a substantial amount of weight. I’m just your average 28 year old mom who finally ate the amount of frozen pizza and wine that causes the type of heart burn only a grown man in a KFC should experience. Since I’m not willing to give up wine, I figured I should swap some of my deep fried and cheese covered favourites for some “cleaner” options. On a whim, I downloaded the Optimal Beauty E-Book, which was full of meal plans, shopping lists and affirmations that would make Oprah proud. I was to eat nothing but vegetables, fruit, tahini and bee pollen. I think deep down I knew that this was a bad idea because I suffer from Food Anxiety. I’m always stressed out that there won’t be enough or that something I order won’t be made how I want it. (See the time I was given a burrito with sweet chilli sauce.)

Regardless, it was time to do something good for my body. After loading up on $300 worth of ingredients that Gwyneth Paltrow would definitely have in her pantry, my best friend Emily, who’s visiting from the states, and I began our new and improved meal plan with a super green and creamy smoothie. It was delicious and surprisingly filling. For about an hour. Since I’m the kind of person that likes to have a second breakfast, waiting until Emily made our next dish was torture. All I could think about was the bread smell from Subway and buffalo chicken subs from Publix. Still, I resisted. I mean, if I couldn’t go vegan for 24 hours, what could I do?

Roughly four hours into my new and improved life, my food anxiety made me unable to person. Forming sentences was hard. Remembering my children’s names was challenging. Trying to be presentable in public was impossible. Basically I was like 2014 Amanda Bynes. (I love you, Amanda!)

As I watched Emily peel slices of zucchini for a faux pasta dish, I took note that I felt shaky and nervous that there wouldn’t be enough. Since, I’m also a very visual eater, I rely on quantity to tell me that my stomach is full. (Side note – When I was 17 and trying to be a movie star in LA, I tried to drink a SlimFast for breakfast instead of my usual corn beef & hash. BUT it only felt like a drink so then I’d eat real food immediately after and subsequently double my caloric intake. Long story short – I gained 25 pounds in five months and did not become a movie star, but did get three new stretch marks I like to call Bertha, Gert and Esther.) Emily dished up two gorgeous (but small) bowls of raw veggies pretending to be pasta on a bed of quinoa. The first bite made me drool. It was delicious. The second bite caused me to lift the bowl to my mouth so that I could shovel in the vegan goodness faster.

That’s when I had my full blown food anxiety attack.

My fingers turned to butter (like the butter I was no longer allowed to eat) and the bowl slipped out of my hands and shattered on the counter. (I should probably mention that this was the second time I had had my food fall that week. Previously, Axel had dragged my salmon burger and plate off the counter with his six month old fingers. Since I had looked forward to the brioche bun all day, I still ate it. I’m 83% confident that there is an unsafe amount of dog hair, dirt and shattered plate lodged in my stomach lining.)

So here I was eating quinoa mixed with shattered porcelain. Apparently, giving up meat for a few hours will make me an even more ridiculous human. After my coconut, walnut and apple bliss ball snack, I started thinking about my behaviour. Why on earth did me giving up my usual breakfast wraps and tuna sandwich lunch cause me to act like a heroine addict missing her Methadone dose? Emily and I concluded I needed larger portions and more snacks, especially since I’m breastfeeding. 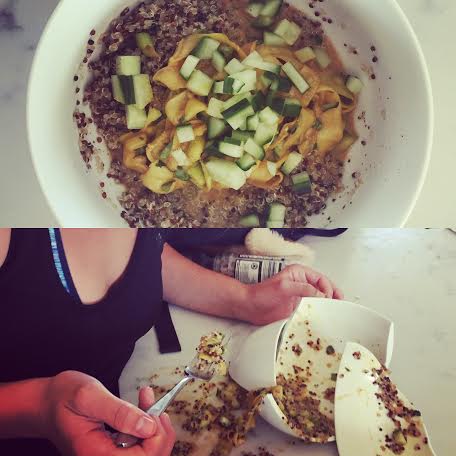 For dinner, Emily put together an amazing Mexi-Bowl smothered in vegan nacho cheese. I know that sounds like an oxymoron, but it’s a thing I swear. It was made with nutritional yeast, coconut oil and flour and I’m shitting you not – it tasted just like the kind of cheese you get at a movie theater or bowling alley. (In other words, ah-mazing.)

I got in the shower and washed the day off me. Of course, I began to pee because I’m physically unable to enter a shower (or pool) without peeing. What I saw next truly frightened me. My pee was yellow. Not dehydrated yellow – but like Laa-Laa Teletubby yellow. I called for Emily to come look at my puddle of fluro ooze. She said hers was like that too. Curious, we started thinking it might be from the abundance of nutritional yeast we were consuming. After a quick google search we learned that yes, the yellow in our pee was from a healthy serving of B vitamins. One blogger said, “It’s your body’s way of saying thank you for all the nutrients!” I’m just thankful I didn’t take a shower in our town’s public pool that day. EVERYONE WOULD KNOW I’M A POOL-PEE-ER.

The next day, my food anxiety was still present, but I was doing my best to eat “clean.” However, I noticed I felt lethargic and that my mind was foggy. I started thinking about slices of salami wrapped around olives and perfectly cooked egg yolk dripping down my chin. I also thought about licking a salt block. It was almost erotic and I started understanding why some men like to feed their plus size girlfriends.  Since I was clearly losing my mind, I contemplated getting an Uber to take my kids to daycare, but then remembered I live in rural Australia. Instead, I ate an apple and pulled it together.

Okay fine, I ate a fucking slice of salami and I swear it saved mine and my children’s lives.

Turns out, I need meat and eggs to survive. At least for now. However, I’ve really enjoyed adding in all of this fresh goodness to my diet and eliminating dairy. My stomach issues (that all American girls my age have for some reason) are getting heaps better. Definitely check out Danielle’s blog and ebooks HERE.