Maryam Keyhani wants her kids to be bored. As an only child, she was forced to daydream and use her imagination to keep herself occupied and hopes her kids continue to have the same gift of finding magic in everyday life.

“I try not to over program my kids. Life can be rather hard these days, which is why I think being bored is such a luxury. I let my son, Rumi, who is turning four in October, stay home this summer and just run around the house and find things to do. I admit I was going crazy by the end and couldn’t wait for school to start, but imagination really is everything. I particularly love having nothing planned for weekends. One of my favorite feelings is waking up and chatting about what we should do on a Saturday morning. The slower the weekend the better, I always say.”

Things aren’t always slow or boring for Maryam though. When she’s not wowing the Instagram universe with her museum-worthy collection of hats, beautiful paintings and exotic holiday destinations, the jewelry designer, fashion icon and artist splits her time between Toronto and Berlin, where over the past four years, she’s created and welcomed two beautiful souls into the world – Rumi and Dali.

Although her pregnancies seemed to happen with ease, they both resulted in her having gestational diabetes, which roughly 18% of pregnant women in the US develop.

“The first time it was much harder to deal with the diagnosis, but with the second pregnancy I totally had a handle on it, and thankfully was able to manage it both times with diet and exercise rather than insulin injections. As someone who normally eats what I like when I like and isn’t a fan of working out, this was a bit of a challenge, but easy to do since it would keep my babies safe.”

Maryam also got to meet her kids early. Rumi, born in October 2013, arrived three weeks early, while her daughter, Dali who was born in May 2017, was five weeks premature. Unlike a typical labor scene you might see in a movie, Maryam had a silent labor with both of her kids. (Wondering what silent labor is? We were too!)

Silent Labor is when a woman does not feel any contractions while her cervix dilates. Although it is common for many women to get to 5 cm without pain, reaching 10 cm is much more rare.

“With Rumi, I was on my way to dinner and didn’t know that I was actually in active labor. I had some minimal spotting and decided to get checked out at the hospital just in case. Turns out I was already 8 cm dilated. Had I not been paranoid and gone to check, Rumi would have been born while I was at dinner. Which, to be completely honest – my worst nightmare would be to have a baby at a restaurant! The crazy thing is the exact same thing happened with my second pregnancy, however even earlier, which was a bit scary. Since I knew the signs of light spotting, I went straight to the hospital and had another beautiful birthing experience. Because I’m usually such a neurotic person, I never thought my birth stories would end up being such calm ones. With Rumi, I had a doula and did labor and birth coaching classes to prepare, but with my second pregnancy I felt more confident and powerful from my first birth experience that I didn’t really do much but enjoy the ride. With Rumi, my doula was like a kind aunt who had my back. The emotional support was wonderful and I would absolutely recommend getting one for first time moms.”

Even though her pregnancies and labors were peaceful, the first few months of life with Rumi were difficult because Maryam was unknowingly suffering postpartum depression.

“I was in such a baby bubble that I didn’t even think to get help. Also, I didn’t realize what I was going through until after I was better. At the time I thought the constant crying was just because it’s such an emotional time. Once I stopped feeling chronically exhausted and anxious, I realized that my emotions were due to postpartum depression. When I was pregnant with Dali, I was more prepared and anticipated getting help, but the experience was so different. I was happy and light – very different to my entrance to motherhood where I was feeling so many foreign feelings. The amount of emotions you go through is so overwhelming. I can’t believe how much you can possibly love another human being. It’s like your heart is beating outside your body. Even today, I feel stronger than I ever have as the source of life for my two kids, however, I still worry constantly about everything because so much is out of our control and it’s nerve-racking. I feel strong, yet vulnerable at the same time.”

Maryam’s outlook on motherhood is all about nurturing and teaching self-acceptance. Her advice for her kids is to come as you are, no matter the situation. She loves the idea of a childhood filled with fantasy, which is why she tries to be a kid around her kids to create a more surreal way of life and play. 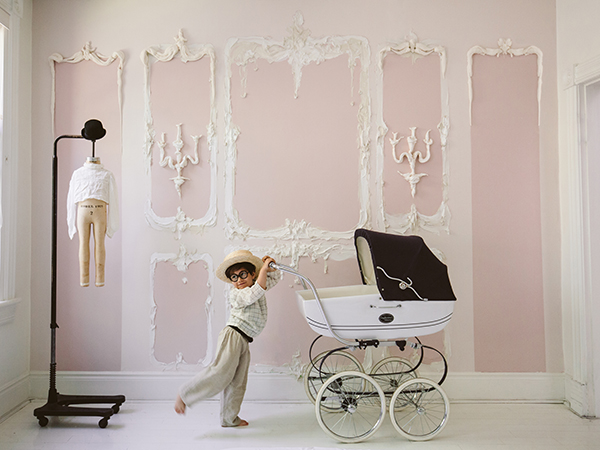 “Especially now the reality of the world is rather dark so I think more than ever it’s important to create, make beauty, spread love and escape when we can to fantasy. When I was designing Dali’s nursery, I focused on making an artistic space for her. My background is in sculpture so I wanted to make something that I used my hands and the materials I knew so I sculpted plaster candelabras and moldings and did a feature wall a few days before I went to labor… in a way the wall is a big artwork I did for her.”

When asked how she finds balance for her career and family, Maryam says, “I’m not sure I do. Anytime I get to go to the studio and make art, it feels like me-time because it’s a part of me I miss and don’t get to visit as much as I used to. However, as an artist I never really stopped working. Pregnancy was an inspiring time for me and I had an incredible urge to work. Not sure if it was the hormones, but it was a good time for me to create. Of course the first few weeks after Rumi and Dali were born, I basically stayed in bed with them and savored those precious times. However, I always kept a drawing tool by my bed. It was a nice balance of nursing a baby in bed all day, but also sketching or painting. I’m also not a morning person, which can be difficult when you’re a mom so I’m super slow to start the day. Now that Dali is just over four months, I get Rumi ready for school and he and my husband usually ride or walk to school together. The time when everyone leaves and it’s just Dali and me is really precious. We usually hangout at my home studio while I paint and Dali naps. I find the first few months of having a baby really isolating so I try to get out of the house for a quick lunch with friends a few times a week. I’ve also been working on kids’ illustration books, which has been really wonderful. I can be a child myself at times so doing these books really feels right.” 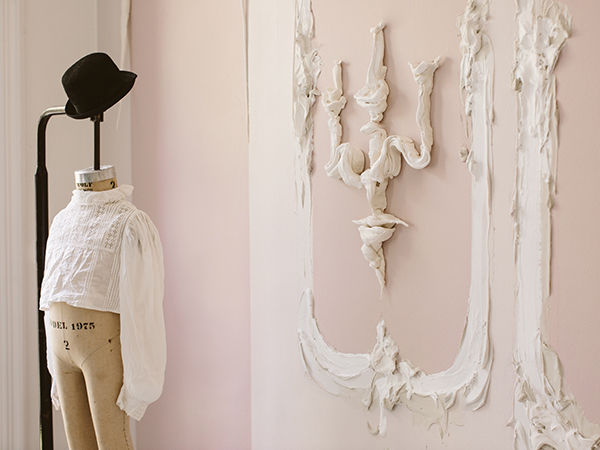 Like many parents, Maryam sometimes feels like she could handle things like tantrums better, but for the most part her main goal is to bring as much fantasy as she can into her children’s worlds and values her and her husband’s cultures.

“I’d love for them to keep their incredibly rich Persian traditions because there is so much beauty and history there for them to take from. I think the best direction for kids is to let them observe what you do. They learn from our actions and our way of life, which is why it’s such a heavy responsibility to be a parent. I feel like I’ve had to constantly question my lifestyle since I’ve had kids to make sure they have a solid role model. On the other hand, as a woman who has her own life and ambitions you also have to stay true to who you are so it’s this incredibly difficult but wonderful balancing act of being an inspiration to them but also not forgetting who you were before they came to your life and maintaining a sense of self. I was actually painting with Rumi a few days ago and I was giving him a suggestion and he turned around and said to me ‘Mom, I’m the artist and I can decide how to make my art.’ I almost fainted with happiness.”

Images published with permission via rebeccawood.ca