I don’t want to brag or anything, but I got an Advance Reader’s Copy of Rose’s Vintage and DEVOURED it. (Being a C-List author really has its perks!) Anyway – this novel is everything you need in your life right now. You’ll finish it feeling inspired and thirsty for wine, love, adventure and more! It’s available April 18th from all good book vendors!

I also had the pleasure of asking the author a little bit about herself and writing. 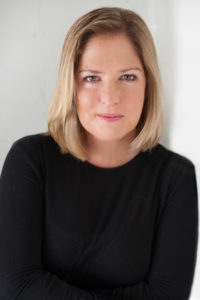 1. Can you tell me how Rose’s Vintage came to life? Was this novel always inside of you?

Words have been a part of my life forever, as both a reader and a scribbler of childhood diaries and stories, bad teenage poetry and as part of a career as a features writer and editor. I’d always had a secret dream to write novels, though never the gumption or the courage to actually do it. The perfect storm of circumstances arose nearly three years ago when I had a break of a couple of months between work projects and my youngest daughter was in daycare three days a week. A friend had recently got a publishing contract, I’d read several fairly ordinary books and thought well, I can do better than that (little did I know just how difficult the process was going to be!) and, in my early 40s, it was a case of now or never.

I had begun to write a few short stories, and enjoyed the process enormously – I loved how writing stories made me feel – it filled me up and I loved the sense of achievement, that’d I’d created something out of nothing.

One rainy winter’s day I was sitting in Bondi at a café looking out at the grey ocean and the litter blowing around in the wind, and I began to wonder what would happen if you turned up in Australia from the other side of the world, expecting sunshine and the general gorgeousness that’s depicted in tv shows such as Home & Away and Bondi Rescue, and found that it was nothing like you’d expected…as I sat there I could imagine the character of Rose, getting off a bus, severely jet-lagged and wondering where on earth she’d ended up and what the hell she was doing there. I went home and began writing almost immediately.

2. As a fellow mother of two, I’d love to hear what your writing process like!

Ha! I’m not sure there is a process. It’s been a case of snatching time where I can, of sticking to my guns when I’ve made time to write, of escaping up to our bedroom or the library for a few hours at the weekend, or schlepping my laptop to my daughter’s swim practice, or sitting in the car at her soccer practice, tapping away. Sometimes I’m lucky enough to have between 10-3 to write, virtually uninterrupted, though always, always, the hour between 2 and 3pm before school pick up is my most productive!

I’ve found that I have to prioritise my writing. I look at my diary a week in advance and work out when I can fit in some writing time and try and stick to it and not let anything else – groceries, catching up with friends, laundry – get in the way. My house isn’t very clean and is certainly very dusty!

In terms of planning, I spend some time thinking about my characters and what their story might be before writing a rough outline, which gets refined as I get more into the story. I try and plan what will happen in each chapter, so that on the days when I am feeling less inspired I can look at the chapter and know what scenes I have to get on with. I generally know the ending before I start writing, where I eventually want to end up. If I get lost in the process I summarise the chapters on different coloured post-it notes (one colour for each narrator) and lay them out to help me see a pattern, and balance the narrative.

3. I read that you are the former editor of Gourmet Traveller Wine magazine… did you ever get to head to Mudgee? If yes, tell me about your favourite wineries 🙂 I love Botobolar, Lowe, Robert Steins & Pieter Van Gent…. and Logans. Okay fine, I love them all!

Heavens, I am embarrassed to say that I’ve not yet made it to Mudgee. It’s high on my list, not least because an old friend has a wonderful house to rent there – the Tannery – that looks like an amazing place to kick back with a large glass of red on a cold night. I also met the owners of Short Sheep while I was writing Rose’s Vintage and they gave me some invaluable advice about babydoll sheep, which feature in the book.

4. You’ve hinted that there is a second instalment, can you tell me more about that?

Yes, there is a second book in the series, called The Angels’ Share (which is what the wine that’s lost to evaporation when it’s in the barrel is known as), which introduces some new characters to the valley, but also continues the story of Rose and Mark. It’s due to be published in 2017. I’ve also been asked to write a synopsis for a third in the series, but at the moment I’ve changed tack and am writing a historical mystery about a late-Victorian female plant hunter and botanical illustrator.

5. What was your publishing process like? Did it happen overnight?

It took about three years – so not overnight at all! I spent about a year writing a first draft and then sent out my three chapters and synopsis. I got my fair share of rejections, but then my current agent read my submission and asked for a month to read the whole thing. After a month, she rang me and we had a long chat and she gave me lots of advice on changes. We gelled almost immediately. I took those on board and resubmitted to her again with a revised version several months later. She was happy with my changes, and began the process of submissions. Several publishers said they liked it, but that it was too close in tone or subject-matter to other writers in their stable. One publisher offered a great deal of good advice and so I went away again and rewrote (and had to ditch the first three chapters – gulp!) some more. Then, Black Inc had been sent a copy, as they were developing a contemporary fiction list, and they came back and offered for it, and the second book in the series, which I was by then half-way through writing. It’s been a great experience to be published by a smaller publisher who has really believed in and got behind the book. Rose’s Vintage has now also sold in Germany and Poland.

6. What are you currently reading?

I’ve just finished Favel Parrett’s Past the Shallows, which I absolutely loved and reminded me a lot of Tim Winton’s writing about the ocean. I’m now reading a YA book called Maladapted by Richard Kurti. I knew him years ago when he was a fledgling scriptwriter and I came across his name on Twitter a few weeks ago. It’s an odd feeling to read a book by someone I once knew well. It’s a great high-concept, action-packed novel and I can really see it working as a movie.

Rose’s Vintage by Kayte Nunn is published by Black Inc Books on April 18 and is available from all major book retailers and etailers. For more information on Kayte, go to www.kaytenunn.com. 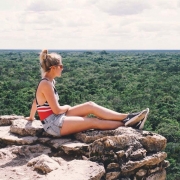 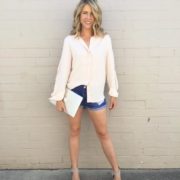 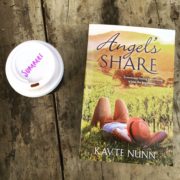 Books That Give You All The Feels: Read the first chapter of Angel's Share by Kayte Nunn

We Are Orlando
Scroll to top